In partnership with the Walton Family Foundation, four culturally significant watersheds in Arizona, New Mexico, Colorado and Utah are being restored thanks in part to grants from Forever Our Rivers Foundation.

The Gila Watershed Partnership oversees these efforts on the upper Gila River. This snowpack fed river flows from New Mexico into Arizona through the nation’s first Wilderness Area. Today, the Gila hosts thickets of invasive tamarisk so extensive they act as a dam, stopping the river’s flow and increasing the risk of high intensity wildfire.

The damage caused by tamarisk is extreme. Not only does it push out native cottonwood trees and willows, it poisons the soil with salt which accumulates in its tissues and then seeps into the ground.

A biocontrol agent brings an additional challenge. The tamarisk leaf beetle was approved for release by the US Department of Agriculture in 2001 to defoliate and suppress tamarisk. Unfortunately, tamarisk defoliation during breeding season exposes the endangered Southwest Willow Flycatcher’s nests and eggs to parasitism and predation. To protect the bird, cottonwood-willow forests need to be pre-emptively established so that the flycatcher, as well as threatened yellow-bill cuckoos have productive nesting habitat.

Fortunately, the Gila Watershed Partnership has a proven track record of success. To date they have restored over 200 acres of habitat islands within a 54-mile stretch of the upper Gila River.

Friends of the Verde River: The Verde River is one of Arizona’s few remaining perennial rivers. It is home to an amazing diversity of wildlife. At least 270 species of birds, 94 species of mammals and 76 species of native amphibians and reptiles rely on this watershed. Roughly 10 percent of Arizona’s rarest forest type—the species rich Fremont Cottonwood/Goodding Willow habitat—can be found along the Verde. The Friends treat tamarisk, Russian olive and tree of heaven. 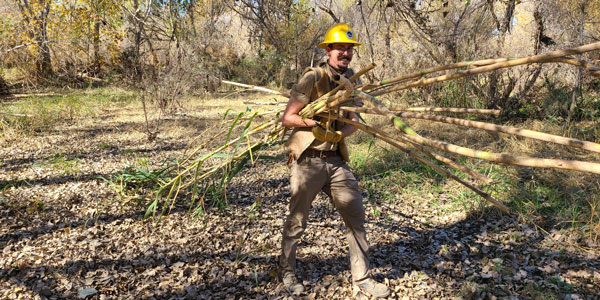 Grand Staircase Escalante Partners: The rugged Escalante River in Utah was one of the last rivers to be mapped in North America. It’s remoteness and stunning sandstone cliffs bring visitors from around the globe. This ribbon of green winding through red cliffs sustains 85% of Utah’s native plants. Extensive growth of the Russian olive tree along the river has choked it to an unnaturally narrow channel, impacting the growth of native cottonwood trees and destroying wildlife habitat. For recreationists, Russian olive’s impenetrable underbrush also impedes access to campsites and increases risk of wildfires.

RiversEdge West: The Dolores River boasts headwaters at 14,000 feet in the San Juan mountains of Colorado. It runs nearly 230 miles through steep, sandstone canyons to its confluence with the Colorado River near Utah. “Strike teams” focus on eliminating tamarisk and Russian olive resprouts while also treating persistent secondary weeds like Russian knapweed and hoary cress. Many of the sites are only accessible by raft, but river flows high enough to float a raft don’t occur every year. Fortunately, RiversEdge West has excelled in bringing together a diversity of stakeholders to create a Dolores River Riparian Action Plan which has enabled their science-driven vision to achieve large-scale success.

RiversEdge West was also awarded funds to collaborate with all four watersheds in pursuit of consistent monitoring protocol and collection of data. They will oversee the entry of data into a geodatabase and provide data analyses and reports in collaboration with the University of Utah. This data will support decision-making and future monitoring and restoration prioritization.

Why is this important?

The most common barrier to successful river restoration project is funding for follow-up monitoring and maintenance.

Without dedicated resources for long-term stewardship, these tributaries to the Colorado River risk having the habitat quality gained during restoration significantly degrade. Forever Our Rivers grants leverage and safeguard the time, money and effort—literally millions of dollars and hundreds of work crews—expended on the initial phases of restoration projects.

Launched in 2018, our Community Grants are focused on improving wetlands and wildlife habitat and sustaining flows. They are also focused on connecting communities to their rivers.

In Gunnison County, Colorado we funded a transformative project at Taylor Creek, the headwaters of the Gunnison River, which flows into the Colorado River. High Country Conservation Alliance partnered with state and federal agencies to install more than 150 beaver dam structures. Made of natural materials like willows, conifer and mud, these dams began almost instantly to rewet 30 acres of historic wetlands.

Why is this important? Restoring wetlands allows melting snow to spread across the landscape and move slower, reducing downstream flooding. Wetlands provide homes, food and water to hundreds of species of all sizes: from beavers and elk to butterflies and trout. Wetlands are often called the kidneys of watersheds, as they purify water by removing sediments and pollutants.

This nature-based solution is simple and natural—yet so powerful that it is attracting the attention of folks in Washington DC as well as corporate America. It also attracted very important ecosystem engineers—a pair of beavers returned to the site after a 25-year hiatus.

Further west, a new boat ramp will provide ideal access for Delta and Montrose County river enthusiasts. It also enables a broader diversity of people to enjoy float trips in an area where previous access points were 15 miles apart. Grant recipients include both Colorado West Land Trust and the West Slope Conservation Center. The partners will improve 8.5 acres of riparian habitat by planting native shrubs and trees.

They will also empower volunteers and engage youth through multiple workshops focused on riparian plants and long-term monitoring and maintenance.

Why is this important? This in-town float provides calm waters with dedicated put-in and take-out locations, providing opportunity for beginning boaters to improve their skills. Its location is also convenient for the county’s underserved communities.

Colorado Canyons Association helps thousands of kids and adults connect with nature. That’s a win-win, as volumes of research found that spending time in nature reduces stress and promotes healing. A grant from Forever Our Rivers will support day river trips for members of Partners-West, a nonprofit dedicated to building one-to-one mentoring between youth age 6-17, and caring adults. Funding also provides overnight river trips for students at Diné College, a public tribal land-grant college. For many, it is their first-time rafting. For others, the educational component strengthens their knowledge of rivers and the challenges they face.

Why is this important? A growing body of research confirms that spending time in nature provides robust benefits. An antidote for stress, enjoying our rivers and streams can lower blood pressure and hormone levels, enhance immune system function, and improve self-esteem.

"With funding from Forever Our Rivers, we are able to remove invasive plants along the Dolores River and revegetate and steward these areas with native plants. Together, we are making a difference." - Shannon, RiversEdge West